John Glenn passed away, Donald Trump is President Elect, and developers are turning Nazi camps into luxury resorts; 2016 appears to be the year of “What just happened?”

More close to home, I have reviewed the AIA, AGC, and the Deltek reports, spoken with numerous industry professionals, and analyzed trends on the projects we are managing to conclude the following opinion: generally speaking, there continues to be skeptical optimism related to continued growth and architects feel less positive than general contractors; this makes sense since much of the design work associated with the uptick in 2016 is complete while contractors are still riding the delayed wave of new work. Companies hired more staff in 2016 than in previous years and we saw a trend of professionals changing companies at a higher rate than previous years.  Many seasoned professionals are retiring and the absorption of smaller firms by larger ones, although slower than the 2015 record of 234 sales of U.S.-based A/E firms a 5.4% increase over 20141 is still occurring.

Size Matters
We experienced clients basing project decisions on the continued escalation of design and construction costs. We saw trends of projects increasing in both size (square feet) and programs of work (i.e. large school programs). Clients desire for risk mitigation increased and owners defaulted to the large-sized, resource rich companies. These larger firms didn’t just win the large jobs in 2016, they won jobs of all sizes; it seems significant portfolios, robust teams and the ability to quickly generate designs was the winning strategy in 2016.  As the big guys continue to absorb small firms, albeit at a slower rate than the 2015 record-year, you would think they would depart from the recession mentality of chasing small projects to survive, this has not happened. Small and mid-size firms had a better year than 2015 but since June 2016 the Western Region saw a softening in the Architect Billing Index (ABI) with residential/multifamily offsetting the commercial/civic project decline. 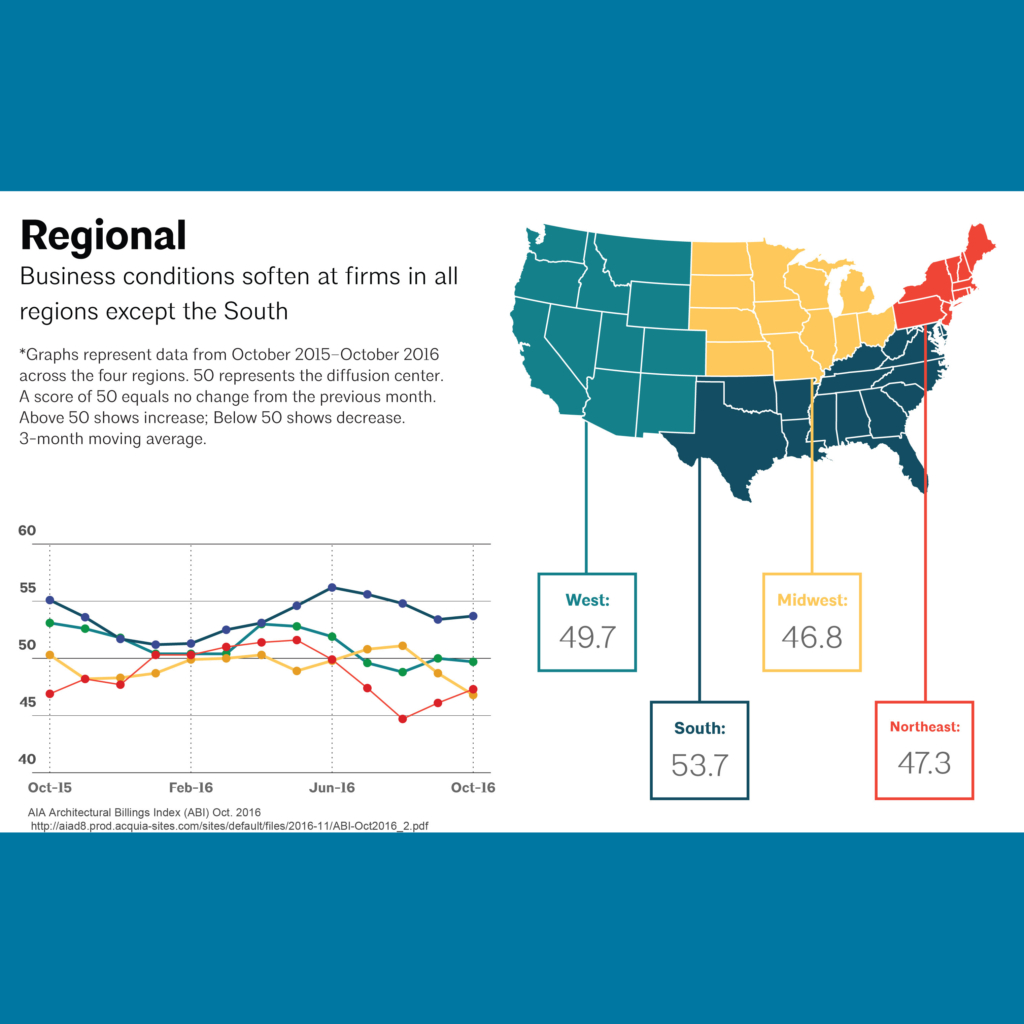 Call me Maverick
One of the most prevalent trends in 2016 was the need for speed. Clients continued to issue RFPs with schedules that border on ridiculous. Submitting teams find themselves in a situation of providing a fee based off a compressed schedule or walking away from the opportunity. Architects and contractors with horsepower continued to benefit from this trend. Having the resources and experience, they capitalized on the opportunity to compete for projects with timeframes that should have been multiplied by two.

I’m feeling blue
Where did Green go? When you have speed, you have less innovation. With new energy codes applying many LEED standards clients seem to be more than happy to use these embedded requirements as a means to meeting green requirements, which is why it’s easy to feel blue–these codes are typically the minimum industry standard and don’t push design teams in the way that LEED and other sustainable systems do. When architect’s and contractor’s time and budgets are squeezed they are often more than happy to shed this scope of work. We encourage the owners we work for to consider the benefits of sustainability but they are currently more concerned about the rising costs and not taking risks.

Innovate or die
Innovate comes from the Latin word innovare and means “to renew or change.” Innovation can therefore be seen as the process that renews something that exists and not an invention of something never seen before. When the recession hit we saw a pause in innovation as firms were squeezed and the fresh minds from college dispersed to different industries. Statistics show that architecture firms are less confident about 2017 than they were about 2016. A recent survey indicates 33% of firms anticipate billings to be flat compared to 22% surveyed in 2016 and 42% compared to 52% believe they will see growth in 2017 (see graphic). As speed increases something has to give; we are seeing more prototypes and reused designs, which again, bodes well for firms with a depth of  experience in a particular project type. 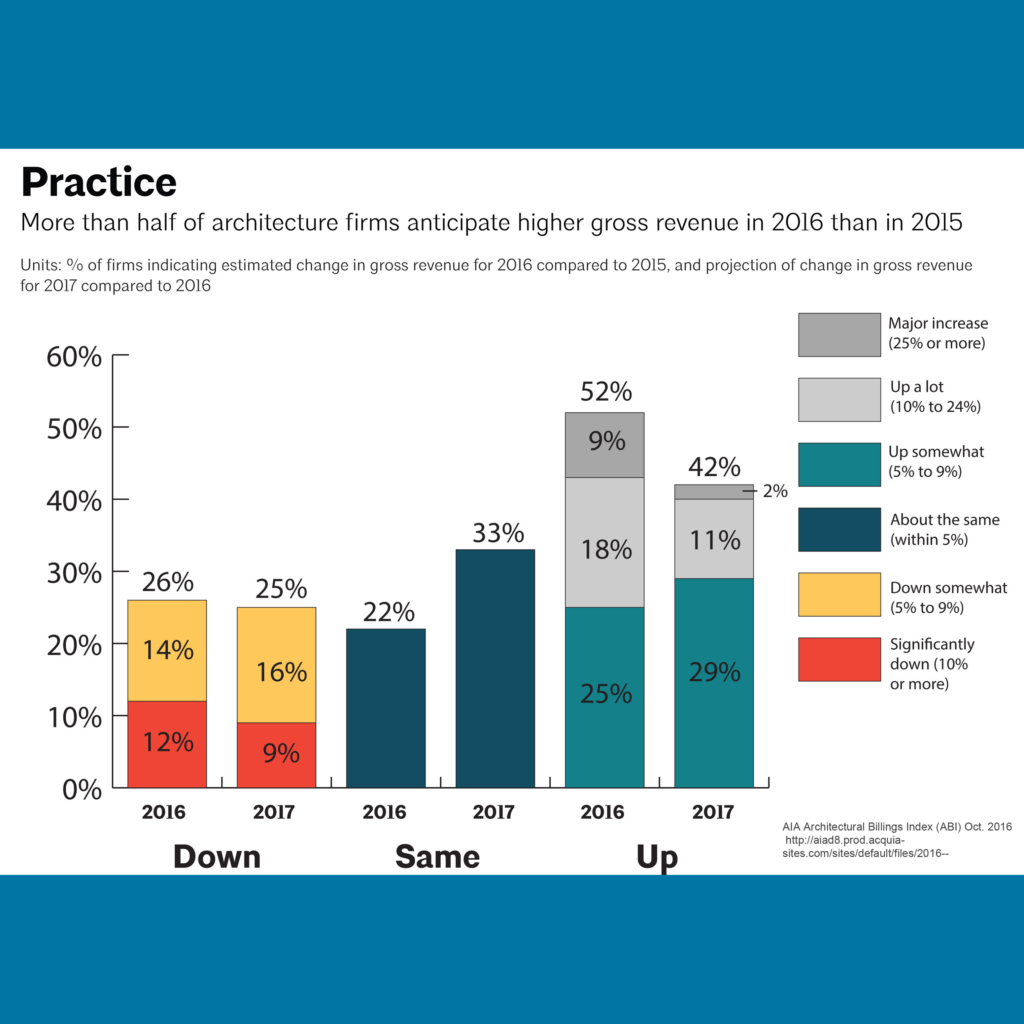 You don’t send me flowers anymore
I hear repeatedly from business development colleagues “you have to have a relationship.”  The definition of relationship varies, but the reality is that we have not fully recovered from the recession and thus have not taken on the overhead of hiring a business development professional or made the time to get out and properly call upon potential clients. 2016 resulted in a 3% decline in win-rate from 45%, which may be a result of why building relationships is ranked high on the concerns for 2017. As these realities set in, firms are ratcheting back their expectations for the future. Many companies project a decline in their position in 12 different markets over the next 18 months and firms reported that client relationships are their number 1 source of opportunity. (37th Annual Comprehensive Report deltek.com/clarity)

Money and crap roll downhill
Do you track the volume of RFPs issued this year? Compare the amount issued in 2016 for architectural services to those available to civil engineers and other infrastructure work providers and you will know why your engineers are not calling you back or struggling to deliver on time–they are inundated. This uptick in work is great for the industry as a whole but shifting finances and making aging infrastructure a priority have shifted dollars away from vertical projects. The incoming President has given all indicators that repair of an aging infrastructure is a priority. Time to strategize where your opportunities lie.

It’s not all bad
Despite what appears to be a leveling off, Colorado has been a bright spot of growth with Denver seeing a significant boom due to a varied economy and migration to the city, compared to other parts of the West. Fees may have plateaued for industry professionals, they have reached pre-recession rates and growth is happening at a steady pace. We hope that your business interests and all of Colorado enjoy prosperity in 2017. 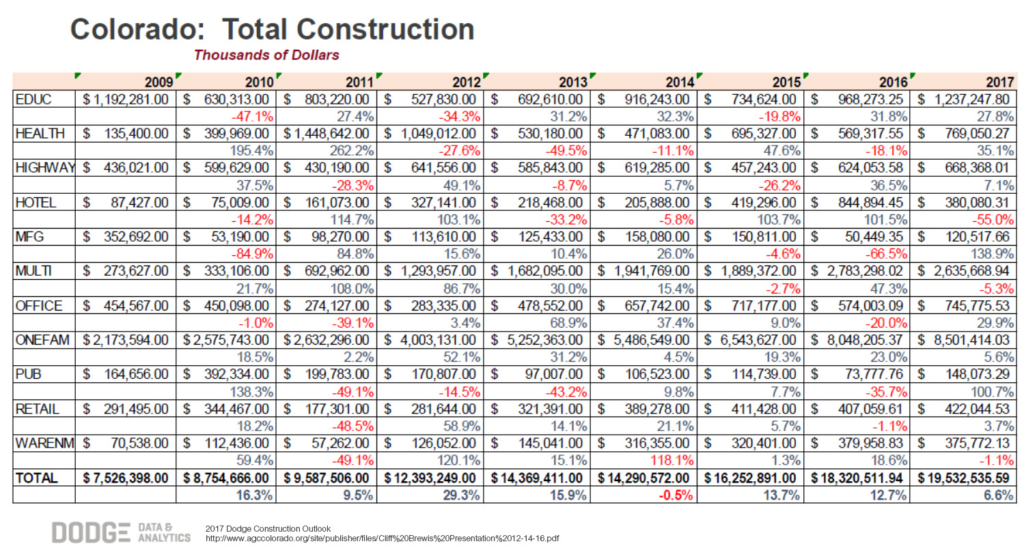