It all started with a spider—a giant 13-foot spider.  “Harold,” who lives in my crawl space all winter and summer, emerges every Halloween in our front yard. He holds a special place in my heart as my kids and I designed and built it together. Halloween, more than any other holiday, reminds me of how design and construction engages a community and impacts all involved.

Since the birth of Harold the neighborhood kids have requested to get involved; we decided to design/build a haunted house in my garage. Like all our projects we began by drafting a solid design. It has been an adventure being part of this Halloween construction evolution.

1. The first year was a simple room with games. It was ok.
2. The second year was a two-room-scene–one with an outdoor cemetery and on the inside a day-of-the-dead dining room.
3. The third year we created a crime scene complete with a digital ghost projection. Although it was cool it did not have proper flow and the result was less than scary.

Then the fourth year came along. The design team of three (my children) decided a maze was the ticket to scary; it solved the problem of year three’s single pathway flop and would allow each design team member an area that they (and their friends) could focus on. The designers brainstormed, researched and eventually decided on the design for each space as follows: click-here-to-view-wember-scareville-plan

But, the real first scare? Building seven spaces with children under the age of 13.

Step #1: build the hall framework; easy right? Simple two by two picture frames with a tarp. And this is where the real fright show begins: eleven thirteen-year-old boys showed up with power tools, borrowed from their parents, ready to work. We trained them on the tools, gave them the plans and sent them to work. It was fascinating to realize how many of these kids have never worked a drill and certainly not a chop saw; the parents thought I was insane (they are likely right). The frames went up smoothly (ok, the first one fell apart upon moving it). At the science lab we opted for a structure made out of pallets; we put the eighth graders on the task.  At the end of the day no fingers were missing and the first aid kit stayed on the shelf.

The boys returned the next day, but I was unable to supervise. So, I cut the wood they needed and made the power tools off limit. Upon returning at the end of the day I found they made great progress with the exception of one item: one of the walls wouldn’t fit as they were putting it in the wrong location. They had the plans upside down!

With the science lab ready to be tricked out my daughter presented me with her detailed interior design including an animatronic Frankenstein, light show and many other amazing features (it is clearly evident how Disney has a significant impact on what she believes is realistic). After value engineering we settled on a skeleton scientist, glow lamps and creepy images.

As scary as the design and construction was, I would encourage anyone to work with kids on such a project. Watching them go through the design, construction, struggles and joy is an rewarding experience; for those of us in the everyday trenches of A/E/C it’s fun to bring it back to the simple joy of the process. 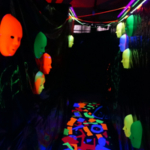 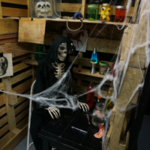 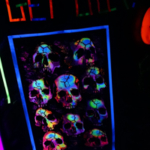