Working on public projects often entails a phase that private projects don’t…the public process.  This process is always unique simply because the people attending public meetings have their own opinions and personalities.  When presenting you never know if you will have a happy or hostile crowd; supportive or outwardly against anything you propose, no matter what you do.  We have been a part of many public meetings, some more successful than others but none that actually let people vote, until now.

This particular client’s communication team came up with the concept that the public should but be able to be part of the project at a higher level, by voting on the design.  The design team worked with them and determined we had to narrow down what they would actually vote on that wouldn’t impact the design timeline in a negative way.  After some discussion we agreed that allowing the public to vote on the “theming” of the pool would be the best option.  In order to generate creative theming ideas, the team went to three after-school programs to talk to various groups of children. The students came up with many ideas some even prepared drawings.

We began realizing we had an interesting problem at hand. Once the theming ideas of video games, Minecraft and zombies came up, all other ideas seemed to be of little interest.

Our team continued on the path of meeting with other school groups but time and time again zombies came back to life.  Our team was quite nervous about opening a zombie-themed project but needed to respect the process that we chose, we finally uncovered some more original ideas and ended up with our top six ideas to vote on. 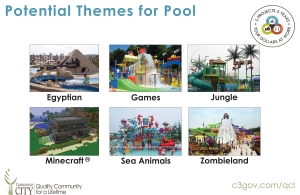 The options were posted and voting commenced.  Currently our team is anxiously awaiting to learn which theme will receive the most votes and comments.

What can be learned from this?  Simply stated, never let the public vote on design ideas. We are full supporters of public engagement and have had some truly amazing ideas come out of the process, but in our experience that is where the involvement ends, otherwise you might turn up as the walking dead.